Scenes from the Greens

A greenkeeping blog from Castle Royle

Stay up to date with everything happening in and around the course during the 2022 golf season with our greenkeeper’s blog! We’ll be sharing news of upcoming projects, new team members and member notices to enhance your golf game.

The southern summer I was promised finally arrived, and the course is now playing like a true inland links. With only 45mm of rainfall in June and 3mm throughout July, those areas without irrigation have turned a beautiful shade of golden brown. The deep rough has thrived in the dry conditions and the fine fescue we were hoping to see is now the primary grass once again in the majority of these areas.

Unfortunately, the Ragwort has also enjoyed the conditions - this is not ideal but will be remedied for next summer as part of the long term deep rough management plan. Mechanical issues early in the year meant we couldn’t get all the areas sprayed with the selective weedkiller we planned.

Areas with irrigation have received water both from the automated system through the night but also via hand watering of key areas with the hoses during the day to maintain moisture levels and plant health. The peak of the dry spell came when we hit temperatures of 40 degrees - as a Northerner, working in these temperatures was a new experience for me!

Work continues refining the putting surfaces while at the same time reducing the organic matter content. Regular grooming, vericutting and sand top dressings will continue throughout the season to promote better quality greens, both in the short and long term for summer and winter. A regular wetting agent programme is helping the greens through the hot and dry spell by holding a certain amount of moisture within the soil profile, reducing the stress on the plant from moisture lost to the atmosphere through evapotranspiration. The greens are responding well to a reduction in nutrient and water inputs - again key in reducing the organic matter percentage.

Recently, we were fortunate enough to host the Tillman Trophy and introduce our club to a wider audience, which followed the weekend of the Club Championships. This extended period of intensive maintenance including more regular vericutting, rolling, and mowing at lower heights. Reduced water inputs amongst other processes in preparation for competition golf has the potential to stress the greens to a point where playability is affected through grass loss and/or disease attack. Fortunately, the plan we had in place to prepare beforehand, maintain during and recover after the event was effective, and the competition was a success with only positive feedback from the competitors.

We are coming into our greens maintenance period where we will be (weather permitting) double scarifying, hollow coring, applying a sand dressing, vertidraining, applying more sand and brushing in. To complete the procedure, we will solid tine over the top with smaller diameter tines. Doing this last encourages a quicker recovery from the bigger holes. Most of this work is planned for Monday 8th and Tuesday 9th August. Each day we will close 9 holes to allow us to complete the work. There will be work ongoing throughout the week following the two days including the smaller solid tines, working the sand into the surface and possibly applying more sand to ensure all holes we make during the process are sufficiently filled. We will not be closing holes to do this as it is less disruptive to golf than the initial works. 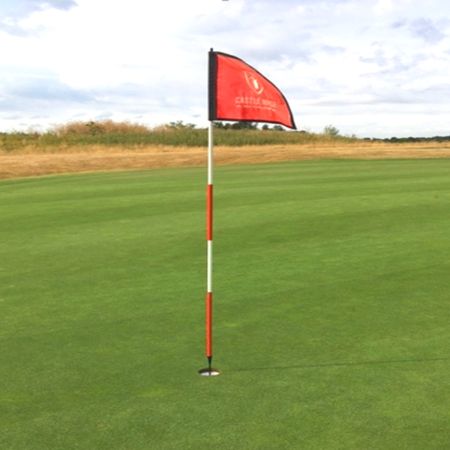 The amount of work we have done on the tees has been limited so far this year. Apart from altering the shape and perimeters of certain ones, we have continued to hand cut and maintain regular nutrient inputs and wetting agents, once again to maintain playability and presentation. We will intensify the work done on tees later in the year to improve all the tee boxes in preparation for use through winter and indeed next season. Many of the sprinkler heads on the tees need raising and adjusting to increase efficiency. The tee boxes are an area where big improvements can be made for the future. A similar plan will be introduced on the collars and approaches to refine and tighten the sward and remove the thick clumpy patches of stalky perennial rye grass resulting in tighter lies. Ideally, we would like to introduce regular overseeding and sand dressings to these areas for next season, but this depends on budgets and staff levels.

We already have one eye on the autumn/winter season and the work we would like to complete. Each season we invest time on certain areas of the course to improve it for the next season and seasons to come. For example, the more aeration we do during autumn will help the course drain and be more playable through the winter and recover quicker in spring, and by sorting all the sprinkler heads when we don't rely on them will make the system far more efficient next summer when we do need them.

The team has changed somewhat over recent months. With three members leaving and new guys coming in, we have a slightly reduced team now but one that really embraces the challenge of achieving the standards we’re aiming to reach. We now have a far more positive and ambitious mentality, and the improved interaction between the greens staff and members, managers and club figureheads all adds to the togetherness and increases the feel-good factor.

I must go on record to thank each member of the greenkeeping team as they have supported me through my early days at Castle Royle. They have been a major factor in getting us to the point where we are now, and the positive feedback from the membership only reiterates the efforts the team put into the course daily. Hopefully we can keep the team together and add one more full-time assistant later this year. Jack Stark has been working with as a summer casual but will be leaving for the States shortly. He will be missed but we wish him well.

Welcome to my first blog as Course Manager here at Castle Royle. Firstly can I thank the membership for the warm welcome I have received despite bringing the Northern weather with me for the first month or so! I find it hard to believe two months have passed already - it's been a bit of a blur really! I have spent most of that time trying to learn about the course, staff, the existing or historical methods and practices, the irrigation, drainage, machinery, stock, personnel, staff and financial limitations, to name a few. I'm starting to get my head round it all now and implement some plans I believe will get the course to a standard where we can all be proud to be part of the Castle Royle community. 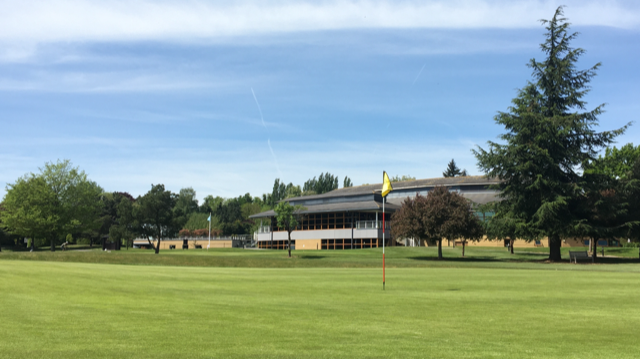 Before I started, the club had tested the level of organic matter in the greens by means of the loss of ignition test. We followed this up with a soil nutrient test that measures things like the amount of key nutrients within the root-zone which are required for plant health, the soil characteristics and pH and nutrient retention capability. It also highlights areas of concern that may need remedial work to correct, such as the slightly high levels of organic matter in the upper profile. This test gives us a starting point to work from and allows us to put together a maintenance plan for the year with the aim of maintaining a healthy plant, allowing us to produce greens of the highest quality throughout the year. Nutrient and biostimulant inputs, wetting agent/ surfactant programmes, disease management, aeration practices, over eeding and top dressings are all planned after reviewing this data. Much of the work included in this plan is achieved through regular cultural practices and I will go into more details of the plans and each of these factors in future blogs.

We have started to work on refining the playing surfaces across the course as day time temperatures rise and growth should gradually increase - although this is hampered by night time temperatures remaining low causing regular light frosts. Light scarifying, brushing, light sand dressing and rolling is now being done more regularly on the greens and will increase in intensity as we head towards summer. Maintenance of the collars, tees, fairways and approaches will also be increased over the coming weeks. Remedial work has begun on the greens as we aim to improve sward density and grass coverage. Hand seeding bent grass into any sparse areas, disease scars and blemishes will continue throughout the season. 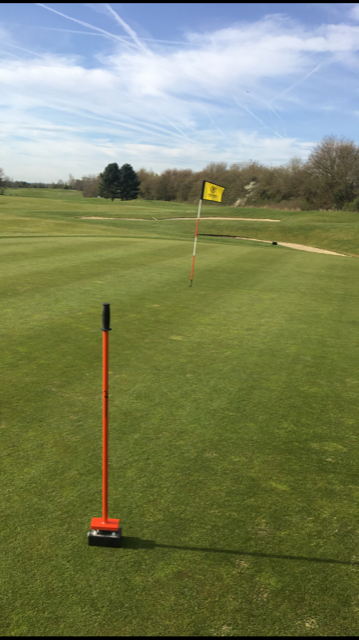 The Accuseed hand seeder we use for drilling Bent seed into the putting surfaces - labour intensive, but very effective!

For various reasons, the tees have been somewhat neglected over recent years so there is much work to be done here. The aim is to hand cut tees and greens (dependant on staff levels and machinery capabilities) and reshape and realign the tees. The plan for the tees is a scaled down version of what we aim to implement on the greens and work is well underway to improve them. 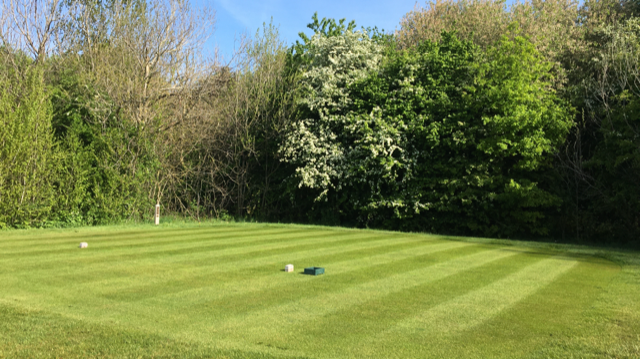 The team consists of a core of staff who have been with the club a while combined with a few new recruits, and we are currently recruiting for two team member replacements. We are also working on a training programme to get the team qualified and to a point where everyone is capable of most tasks, therefore improving productivity, pride and team morale. We are putting plans in place to improve the welfare, facilities and working conditions for the greenkeeping team.

I would like to thank all those members who carried their clubs during the winter. Although it's not always a popular decision to ban trollies, the difference this makes to the course condition through winter is incredible, and the recovery in spring is much improved as a result. The number of members who continued to carry once the ban was lifted was incredible so a big thank you to all. Another thank you to all those that helped divot the fairways over the course of two afternoons; this is a mammoth task for the team but with more than 25 volunteers we made quick work of it and enjoyed a well earned pint together afterwords.

Thursday mornings the range will be closed for maintenance. This will be highlighted in the course status on the club website.